This post was almost called “Ninkasi – The most ‘Google’ brewing company we visited”, but I left it as is because my OCD said to keep everything similar. 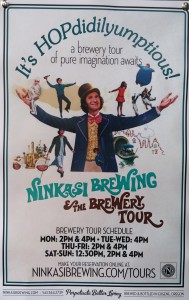 One of the neat things about visiting a lot of breweries over the span of a week is the nuances and differences you see between them. At the end of the day, they’ll all boiling grains, adding a few extra ingredients, and then fermenting everything prior to bottling. So as we walked into Ninkasi Brewing, we knew what to expect, but yet didn’t know what to expect.

Ninkasi (named after the Sumerian Goddess of fermentation) was founded in 2006 by Jamie Floyd and Nikos Ridge. Jamie was kind enough to take time out of his day to give us both a tour and background on his brewery, and you can definitely see the excitement and passion in his eyes and hear it in his voice. Jamie’s both very grounded about what they’re doing, and yet infectiously excited at the same time.

Ninkasi’s original focus was to fill a need for a real packaging brewery in Eugene, Oregon, and while the primary goal was to make beer, Jamie and Nikos also wanted to ensure that they were very involved in the community. When it was all said and done, Jamie said that they want to be a regional brewery that Eugene could be proud of, and I think they’re well on their way if they haven’t made it there already.

We talk a lot about regional breweries on the podcast, and most often cite Olde Mecklenburg as Charlotte’s example. Jamie’s goal is to produce the highest output in the smallest distribution footprint possible. They brew beers ranging from the hoppy (Tricerahops, Total Domination) to very delicious stouts (Oatis, Double Latte from Beer Camp, Vanilla Oatis), and quite a few lagered options as well. 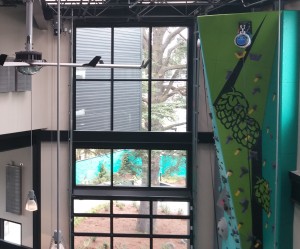 Currently employing over 100 individuals, Ninkasi was by far the most “Google” experience on #beercation. They have a campus environment, with some ingenious ways to transport wort and other materials from one building to another. Then there’s the rock climbing wall, and what sounded like heaven on Fridays,

when they have a cold-press coffee that they put on nitro for the workers.

In 2013, Ninaksi was the 30th largest craft brewery, and that growth has allowed Jamie and crew to both grow and also to focus on pet projects, such as their space program. Yes, Ninkasi has a space program (nsp.ninkasibrewing.com). There is a subset of individuals who are really into rockets, and they combined forces with some amateur rocketeers to build a payload of 16 vials of yeast to send into the upper atmosphere and then return to Earth safely. They built in enough dry ice for a 10hour window, but things didn’t go to plan and they didn’t find the rocket until 27 days later. Luckily, Ninkasi didn’t stop there and is launching more yeast high into the ether this October with the hop of finishing what they started.

Ninkasi’s facility is on its way to be LEED certified for energy efficiency, and they are finishing up their recording studio where they will have the option for employees to tinker around, and also lay down tracks for aspiring artists. 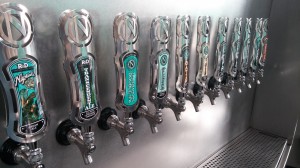 Probably two of the most striking things about Ninkasi (aesthetically speaking), are the teal in the logo (Jamie’s favorite color), and the metal work found in the gates, tap handles, and name placards for the cubes. All of this metal work is done across the shop by metal techs Jazz and Pat, and is all locally-sourced.

Ninkasi was a unique and neat experience, with a casual tap room and a very inviting outdoor area for tasting. Jamie clearly loves what he does, and loves who he works with; that kind of dedication and desire can only make the product that much more delicious!