Throughout the many breweries we visited during #beercation, there were a couple of basic concerns.  Would we burn out on sampling beer?  Would there be enough unique aspects to write about at each brewery to make them stand out?  How would I keep things interesting?
While I thankfully never completely burned out on sampling beer, both Scott and I came VERY close to hop burnout, and by sheer luck, that’s when we walked into Two Beers Brewing. Two Beers Brewing is a brewery that caught my eye due to a lot of interesting beers listed on their website, but once we arrived, I found that I was more interested in their offerings of hard cider from their sister company, Seattle Cider Company.

Founded in 2007 and 2013 respectively, both “Two Beers Brewing” and “Seattle Cider Company” now cohabitate the same physical space.  Two Beers Brewing’s founder, Joel Vandenbrink, found himself unable to enjoy beer as often as he would like due to a diagnoses of Crohn’s Disease, and decided to start a cidery to appeal to his new gluten-free needs.

The draft board had a great mix of styles for all palates.

Walking in, I wasn’t prepared for the cider options, but found that we actually spent most of our time talking about the ciders and the process behind that.  Maybe it’s because we had visited so many breweries and had consumed so many hoppy samples up to that point, but the visit to Two Beers Brewing/Seattle Cider Co was just the palate cleanser we needed.
The draft board is mixed with both beer and cider.  This brewery would be a great place for mixed couples where one likes beer and the other likes cider so that you could try a lot of different things without necessarily committing to going to a brewery -OR- a cidery.  This also would be great for people who want to go to a brewery, but their significant other is gluten-free and usually wouldn’t come along because they’d be bored with nothing much to drink.
Two Beers Brewing offers the types of beer that you would expect; their fresh hop beer utilizes hops that come from a single farm and is one of earliest to hit the market. They send a Uhaul to Yakima to pick up the hops, and then invite anyone that’s interested to help pick the bines when they arrive at the brewery just a few hours later. They also have a session ale that was a hit with the guys during buy/no-buy. Their IPA is very solid. Their cans and branding (which was recently overhauled) are beautiful.
On the cider side, they work with a Yakima-based fruit presser on a specific and customized blend of juice for the ciders; while apples may be plentiful, there are specific varieties that are more desirable for their cider-flavor profiles.
You can find Two Beers Brewing/Seattle Cider Company cans in Alaska, Washingon, Oregon and Michigan (the founder’s home state), but they are not looking to take over the world in distribution (yet).  It’s definitely worth a visit when in Seattle. 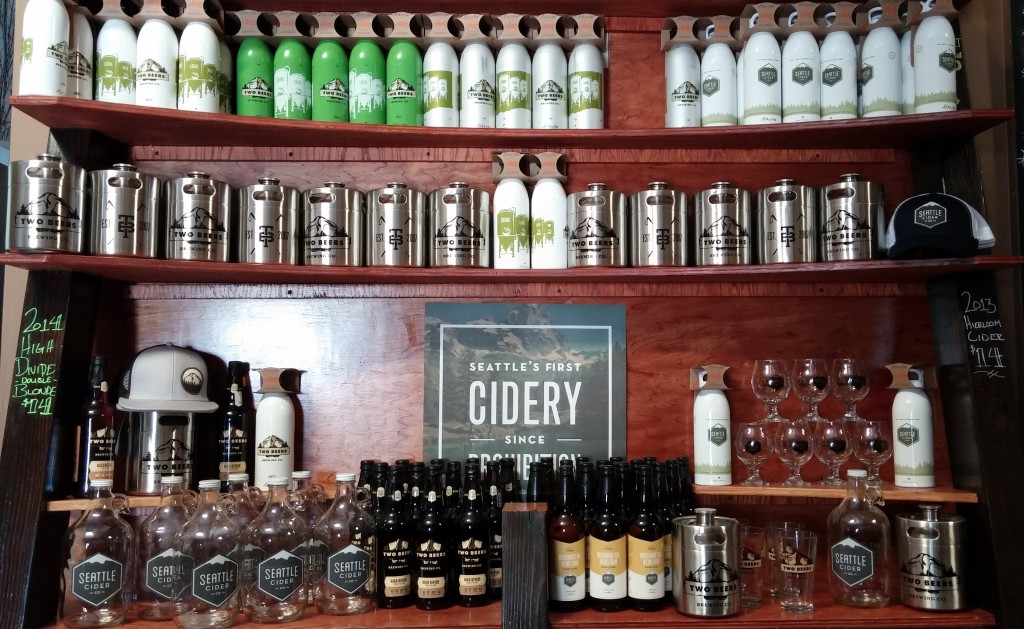