It’s been awhile since I’ve visited a brewery with the intent of writing a piece on them.  Truthfully, while #beercation was a load of fun, for someone that isn’t a writer by trade, it’s almost easier to have several breweries that you’re intending on learning about and documenting, and so when I’m not in the mode to be thinking about writing pieces on breweries, I end up just enjoying them instead.  I mean, not like that’s a *bad* thing, mind you, but those articles aren’t going to write themselves.

After a couple of years’ worth of nudging by Jason B, I finally bit the bullet and agreed to go to 3Floyd’s Dark Lord Day, and as I was preparing to head to Chicago, I reached out to a couple of breweries in the Chicago area that I was familiar with (thanks to Jason and local trading).  I was lucky enough to get a response from Mike”Master of Barrels” Schallau at Pipeworks Brewing.  Mike is a guy that you can tell has a real joy and love for his job, and within minutes of meeting him, it was like we had been friends for a long time.  Mike’s a guy that knows a lot about the craft, and so we were all assuming that he had some kind of formal training, or at least a degree in brewing or some other related field, but he’s a guy that started working at a liquor store, volunteered at the brewery for some time, and due to his love of bourbon, was asked to run the Pipeworks barrel program.  Truly a story that should encourage those of you that want to get into the industry, but are worried that you don’t have the chops or the credentials to make it happen. 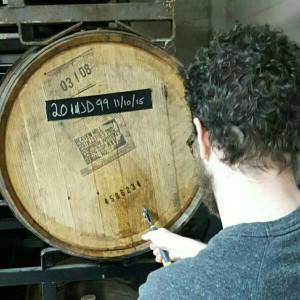 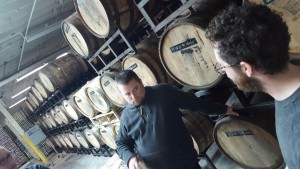 Jason was so moved by the barrel-aging that he needed help standing up straight. Not at all related to his torn MCL/ACL

Pipeworks was founded in 2012, and was focused on small-batch beers, with an intent on 6-7 new beers per month.  Over time, they have grown to 22 employees, and tweaked their direction, and now have two main flagship beers (Ninja-vs-Unicorn Imperial IPA & The Lizard King Pale Ale) in their regular rotation, along with one-offs and spin-offs of their core beers (like the Abduction series, which they brew the base beer once per year, but will produce variants every month or so).  As Pipeworks has grown, they’ve seen their production spike up to 10,000 barrels per year.  Due to Illinois law, Pipeworks can self-distrbute up to 7,500 barrels locally, and 30,000 in totality before they have to sign everything over to a distributor.  You’ve often heard us lamenting this kind of archaic law on past episodes with North Carolina’s similar 25,000 barrel cap. 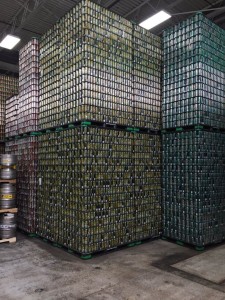 I find it interesting to see both the similarities and differences between the breweries I’m familiar with here in Charlotte, and breweries elsewhere.  Along with the similar self-distribution limitations, Mike tells me that the scene in Chicago is exceedingly friendly, and that Pipeworks regularly hangs out with other breweries, and also trades hops when someone is short on a particular varietal. 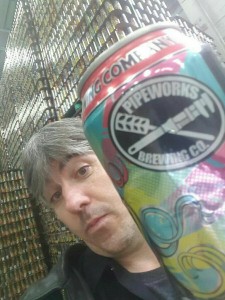 Rob mugs with can in hand. I’m pretty sure he’d have tried everything in the building if he could check it all in on untappd.

Before visiting Pipeworks, I had respect for them for the little beer of theirs that I experienced (Vanilla Abduction and Lizard King).  After visiting, I’m putting these guys squarely on my target list whenever I’m making local trades with Jason.  I’m optimistic that I’ll be back in a year for the next DLD, and I’m excited to see how much they’ve grown in that time.  Mike tells me that they’re working on a brewpub/retail store, and hope to have it open next year.  I for one am very excited to see how that turns out, and I look forward to my next visit. 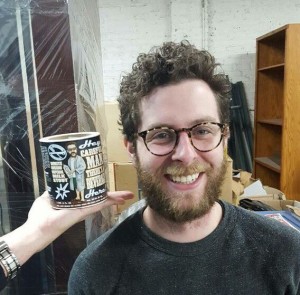 When you work at a fun brewery with lots of fun beer ideas, sometimes you end up on the labels.