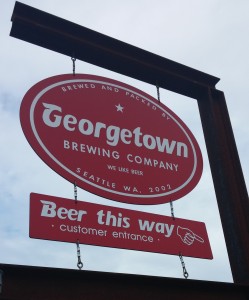 When Scott and I started planning out our stop points for #beercation, we knew that we *had* to spend time in Seattle. The question then was how to decide between all of the breweries that call the Emerald City their home? Without a moment’s hesitation, I knew that Georgetown needed to be on the list. Scott has rocked a Manny’s Pale Ale shirt for what seems like forever, and when my college buddy Pat started singing their praises, I knew that Georgetown was a must-see for the trip.

We make the joke on the show a lot about how we often refer to Oskar Blues as “Dale’s”, as in “Dale’s Old Chub”, “Dale’s Ten Fidy”, etc. Even though they make a pretty killer lineup, for whatever reason, referring to them as Dale’s just has become second nature. So too, for me, was how I inadvertently viewed Georgetown for a very long time. I always thought that it was “Manny’s”, and that Manny had a killer pale ale.

Georgetown Brewing’s origin story starts with Manny (no, seriously), out on a date, and trying to impress a girl. He orders a Black Butte Porter (yay, Deschutes!) in order to impress, and is blown away. Legend has it that when asked about the date, he told his roommate “I had this great beer…”

Manny went to work for another brewery for a spell, but his college buddy Roger kept trying to pull him in to work with him. Manny eventually built a recipe for his Pale Ale, as he was looking for a style that wasn’t being represented in Seattle at that time. 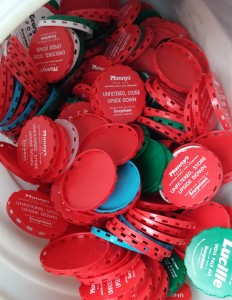 Incorporated in 2002, Georgetown focused on smart growth; slow, focusing on great beer. They made a choice to offer primarily growlers and kegs, and have stuck with that model. While you can find Georgetown on tap in Washington, some areas in Idaho, Oregon, and most recently San Francisco, you’re only going to find it there on tap. 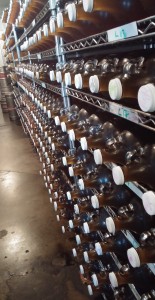 The growler wall, in all of its glory.

Georgetown is bottling two different belgian beers, but they’re extremely limited. Their cooler and growler wall is impressive. I’m not sure that my math was correct, but they appear to have space for over 1134 growlers on the wall, and based on the foot traffic at 10am on a Friday morning, I have no doubt that they cycle through everything in there.

I was very excited to try Manny’s Pale (and it delivered), but I wasn’t prepared for the variety of other options they had on tap. Now keep in mind that you can’t buy a pint at Georgetown, but you can definitely get a growler of their delicious Eddie (an IPL), Johnny Utah, and the “Georgetown Porter” (whose named has been changed due to a 2010 trademark dispute from Magic Hat).

So it seems like the only downside that I could find at Georgetown is that I’m either going to need to fly out there for another growler, or I’m going to have to find a way to ship a baby keg back here to Charlotte!