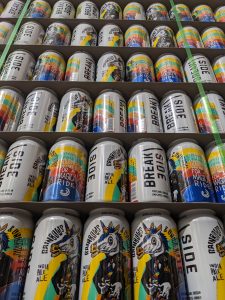 As we were plotting out our path through the PNW during Beercation2.0, Scott expressed an interest in visiting Portland.  Since my first encounter with Portland during Beercation1.0 was not exactly an experience I wished to repeat, I pushed back a little.  Unwilling to be rebuffed, Scott began to build his case, and eventually made a very compelling argument.  “Remember all those fresh hop beers from Breakside?” he said.  “We should go check them out, they make great stuff!”  Well, ok.  I may not be Sunday morning, but sometimes I’m easy.

We reached out, and EK @ Breakside helped to get us in the door.  Nestled just outside the southeast corner of Portland, we pull up to Breakside and I had one of “those” moments.  The sky was perfectly clear, the temperature was amazing.  Everything was just…perfect.  And then, a familiar smell hits my nose.  It’s hops.  And like, the really good and strong wafts of “they’re clearly adding the hops right now and it smells super good and I wish I could make an air freshener of this and maybe it would be too much but also maybe I’m a bit of a genius” kind of smell.  Honestly?  It’s like that smell of bacon.  You just KNOW something great is about to be consumed.

Now, you’ve potentially heard me tell my tales of woe during our last trip to Portland.  The experience of being disregarded by the hipstery, disaffected wait staffs, most of whom seemed almost annoyed at the mere idea of someone from out of town being there.  Heck, we even ran into some of that in Seattle at a certain brewery I’ll never support again.  But as we walk into the front doors of Breakside, we’re met by one of the warmest bartenders that we would meet during our entire trip.  Someone that was truly excited to have us as guests/customers/whatever.  Someone that you’d want behind you bar if you were opening such a place.  Someone that you’d gladly sit down with and get to know them on a human level.  Someone who gave us such a great experience, that I’m still fondly thinking about it, nearly 3 months after our visit.  Stupid me for not grabbing his name.  I’m sorry, sir, and upon my next visit, I will make up for it. 😀

We take a moment to browse the taproom, and it doesn’t take long to notice the medals on the wall.  There are a LOT. 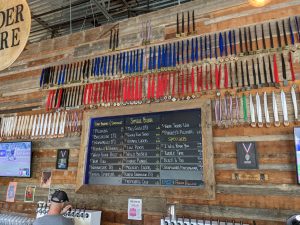 Breakside has won a LOT of medals over the years, but I’m actually struck by how down to earth the staff seems to be so far.  We meet up with EK, who hands us off to “one of the Dans”.  Daniel greets us with a polite smile, I can see that he’s busy, so I quickly go through my routine of why we’re here, and he promptly takes us into the production area so we can see the operations.

If you’ve been on a brewery tour before, they all have a similar cadence.  Hot water here.  Cleaning stuff here.  Mash tuns, fermenters, etc, etc.  It’s always interesting to see how a specific brewery sets their equipment up, but I’ve started to pay more attention to the people on the floor more than the equipment.  They people moving about all have a purpose.  They’re focused.  There’s TONS of communication between them.  This isn’t just a couple of folks making beer, this is an orchestrated effort by a team that is genuinely focused and attentive to the details.  Daniel tells me that they typically run about four batches per day on their 30 barrel system, and he explains that they are an employee owned company, at which point the attitudes make sense.  These are people that have “bought in”, they have a personal stake.  They’re not just there to pick up a paycheck and a shift beer, they truly love what they do.

I make a comment regarding the 22oz bombers in their cooler, and Daniel talks about how they made a conscious decision to use that format because in many cases, it allows them to sell their beer at a lower price point.  Now I want to stop the story for a second and let that sink in and resonate in your brain.  They’re embracing ways to make their beer affordable for you, the end consumer.  Remember all those medals?  All the accolades? (they had just won at GABF and FOBAB) and yet, they’re trying to make their price point more accessible?  Maybe I’m just burned out on the hype breweries that think a 12oz bottle is worth $50+, but this is so refreshing that I can’t stop thinking about it.  Further, Dan (and later EK) mention that the 22oz format is a great option for certain beers, but overall, they’re constantly evaluating their product line to find ways to keep all of their beer affordable.

We make our way back into the taproom and Daniel hands us off to the 2nd Dan and EK.  These two are clearly more on the business side of things, but their passion rings as true as anyone else’s has.  They treat us to a tour of the barrel storage area, and start talking about how they are approaching the barrel program differntly than might be considered normal.

When most breweries develop a barrel-aged beer, it typically starts with a good base beer at which point it’s added to barrels with a specific end product in mind.  Daniel has a similar starting point, but instead of taking a direct path to the end product, he’s approaching it with more of a freestyle manner.  Think back for a second – you’ve probably at some point purchased a heavy barrel aged stout and it’s super “hot”, or one of the adjuncts got out of hand, and it’s just a mess.  Most likely, that could be attributed to a brewery that intended for the beer to work out, but unfortunately it didn’t quite stick the landing, and yet gets packaged anyway.  The genius of the methodology that Breakside employs is that they’re keeping tabs on the contents of the various barrels and then when the beer is ready, they pull it.  Maybe they blend some of the contents with other barrels, all the while creating a product using the best options in the best barrels at the best time.

As my brain is comprehending all this, we walk back to the taproom.  I get a pour of Teamwork/Dreamwork, somewhat nervous about their “double coconut stout”, because what happens if it’s actually just “fine” and not amazing?  My fears melt away immediately.  I’m blown away.  It’s impeccable.  Daniel rejoins us, and we start gushing about how great this stout is, and honestly, just about everything else we had tried at this point. 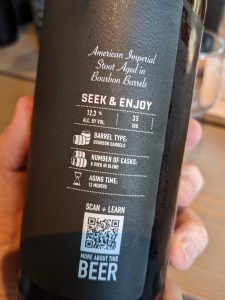 The smile widens on his face and asks if we have a few minutes.  We look at the clock.  Sure, we have a little spare time.  We commit to whatever he has up his sleeve.  He disappears for a bit, and comes back with a couple of bombers to try.  It’s a fresh hop.  It’s phenomenal.  We’re raving about it.  The smile widens even further.  “Hey, do you have another minute?”  Well, maybe, but we really need to hit the road because we have an appointment coming up in a couple of hours and need to drive (and get some lunch!).  He brings back a few bombers of his stouts.  The stouts he’s making.  He explains that he’s working the barrel aging program with the intent to bring out a beer every quarter or so, with the big idea of having a “greatest hits” mix pack for the end of the year.  Sure enough, in December Breakside is releasing a 12pack of bombers that clock in around $10-12 average cost per bottle.  I’m so jealous that I’m not conveniently located, but my liver and my wallet probably appreciate the distance.  I start to consider the thoughtfulness of not just making great stouts, but making great stouts and then keeping some back to sell as a mixed pack so that you effectively get a vertical of Breakside stouts.  I’m smitten.  I’m overjoyed.  I wish I had “another minute” to just set up shop and stay at Breakside for the rest of the day.

I’m now looking at this brewery as a place where I would spend all of my free time and money if I lived out there.  But absolutely the highlight of our trip, and a brewery that I hope to support from afar and up close the next time I visit the PNW.

Killer IPAs.  Fantastic stouts.  Oh, and in the time between our visit and this article, they’ve launched a barleywine series called LIFE that I can’t wait to get my hands on.