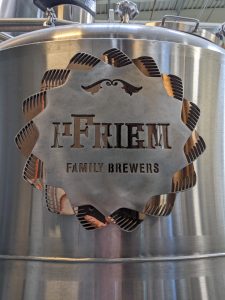 When Scott and I set out to plan the logistics for Beercation2.0, one of the key elements were the “must visit” breweries. We had discussed whether or not we wanted to follow the same path as last time, or to try completely different regions? Scott was keen on scoping out a new state altogether, but I had a couple of Washington/Oregon breweries in mind that we didn’t visit during our first Beercation that I really wanted to visit.

On the very top of my “Must Visit” list was pFriem. I’ve been fortunate enough to have Scott send me beer from their brewery over the last few years, and I was always excited to see their products show up in care packages. So when I received the email response from pFriem that they would have time to sit down, I became extremely excited.

Josh Pfriem is a busy guy that has a lot going on at any given time, but in a good way. He was gracious with his time when we didn’t deserve it (we were late to the appointment), but once he starts talking about the brewery, a big smile forms on his face. Even more so, as he talks about the _people_ in the brewery, and what they’ve strived to create, the smile grows even larger. This isn’t someone that is dropping empty platitudes or trying to make it SOUND like there’s a great culture here, it’s clear that he’s leading a brewery with an attitude of humility and drive that is resulting in a truly special environment. 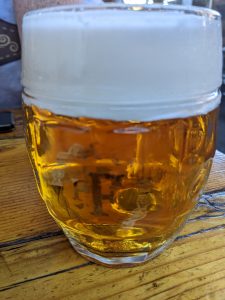 Who doesn’t LOVE a sidepour?

Josh talks about how he homebrewed while in college, wanting to ultimately open a spot of his own. He started out by focusing on the science and engineering side of making beer, but kept grounded in the idea that beer is about lifestyle. “All you need”, he says, “is beer and gear and everything in between”. He wears the passion for his product on his sleeve, mentioning how he feels like “anytime you make something for friends, you have to make your best”.

Starting at Wasatch brewing, Josh moved over to Chuckanut for a spell before eventually taking a job at Full Sail, which conveniently happens to be on the other side of the highway from pFriem’s brewery. In 2011/12, Josh and 2 others launched pFriem Family Brewing. He traveled to Europe and spent a lot of time focused on belgian beer. Rudy Kellner (one of the brewery partners) grew up in Slovakia, and they both shared a vision of creating a world class product set, aiming for an elevated experience. One of their mantras focuses on “making beer better than we did yesterday”. Their continued success at festivals like GABF proves that what they’re focused on is working.

Their production capacity today is 40,000 barrels per year with the ability to move up to 100,000 if necessary, but they’re currently being patient with their growth. “We only want to grow so long as we can keep up the quality”, says Josh. It’s clear that there is a method, a focus, a skill that is part of their bloodstream and culture; as we toured the brewhouse and I observed the workers, it was clear that it’s not just a pithy line for a tshirt, this is a culture that is embraced by the entire team. Everyone greeted us with a smile, work continued, and nobody had that look on their face like they didn’t enjoy the part they play in the brewery’s success. It probably sounds cliche, but this is a TEAM.

calming, serene, recharging my batteries without realizing it….

pFriem Family Brewers is located in Hood River, Oregon. It’s a neat little area that has the charm of a small-town, but also is the home of decent-sized breweries like pFriem and Full Sail. The brewery is right near the waterfront of the Columbia River, and the taproom has a very warm and welcoming aesthetic. They have a nice “gift shop” where you can purchase to-go beer and merch, and they serve excellent food in both the taproom and their outdoor space. There’s a nice walking path for burning off those calories you just consumed, and with the mountains in the backdrop as I looked out from our table, I was overtaken by a sense of calm. We were on day 3 of Beercation2.0 and had been running pretty much nonstop, but for the first time on the trip…everything felt like it slowed down. In fairness, this was our first stop that wasn’t a big city, or at least adjacent to one, but even given the short amount of time I was there, I kind of started to fall for the town. I’m not outdoorsy per se, but I could see myself getting more into that lifestyle if I spent a lot of time in this town.

pFriem was a brewery I had admired from afar, but after visiting, I think I love it even more than before. It’s absolutely worth the effort to visit if you’re near the area, and I look forward to continuing to sample their beer when the opportunity arises. One of these days I’ll make it back out to Oregon, and pFriem will get another visit. Until then, my fingers are crossed for more care packages with those containers of excellent beer featuring a gold pF on them.