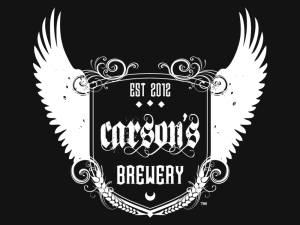 Those of you that have listened to the show for awhile know that I’m originally from Indiana, and during my last visit to my hometown, I visited the fairly new Carson’s Brewery.
Jason Carson started plans for this brewery over a year ago, when his original desire for opening a distillery wasn’t grabbing hold in the way he had hoped.  “There were a lot of distilleries in Tennessee and Kentucky, but there wasn’t anyone close enough to mentor me in the way I wanted.”  Rather than put his dreams on hold, Jason opted to open a craft brewery instead.  “We want to make beers are that unique and identifiable in the marketplace.” 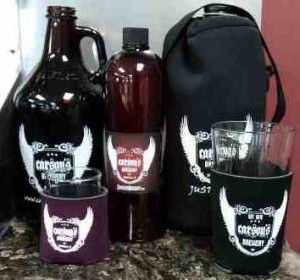 With Jason’s focus on distilleries comes a passion for aging and conditioning beers.  We walked around and looked at his barrel collection, some of which he said he cold-called distilleries to obtain.  He pulled a sample of a pumpkin ale (they’re calling it “Jackie-O-Lantern” that has been aging in a barrel used for 12-yr Bacardi Rum.  Many of you know that I’m no fan of pumpkin beers, but this one totally works.  Carson’s has recently added a “Barrel Reserve” Club that you can buy into and receive first dibs at their limited release aged beers.

Lots of barrels full of beer, including “Harry Porter”

You can definitely see Jason’s passion for distillery when you walk around his facility.  Clearly, the brewing equipment for their beer is front and center, but there’s an ever-growing section of rum, whiskey, and bourbon barrels for aging their beers.  In my talks with him, you can sense there is a real passion for distillery, and part of his future expansion plans call for a modest distillery.
But while he waits for permits and licenses, he’s busy cranking out 6 core beers for consumption: 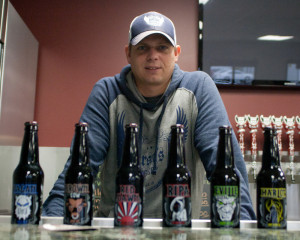 If you look at the labels (http://carsonsbrewery.com/the-beer/), you’ll notice a definite goth-influenced style, which Jason explains has as much to do with his goth friends as it does the comparable designs of Three Floyds and Stone Brewing.  The Carson’s logo is based on their family crest, with barley added around the sides.
One of the questions we ask a lot of breweries that are packaing is why they went with bottles versus cans, and if they have a preference.  In Carson’s case, the decision to go with bottles was to differentiate themselves from an existing brewery in Evansville that was producing strictly cans, and also because they were able to obtain their bottling line at a discount from Duclaw.  “When they told us how much they wanted for it, it was a no-brainer,” smiles Jason. 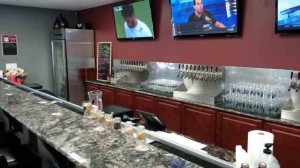 The taproom always has extra options outside of the normal core lineup if you want something new and special.

Carson’s is currently distributing in Evansville, but Jason tells me that their biggest market right now is Indianapolis.  It doesn’t hurt that Jason worked quite a bit with Sun King’s brewers when he was launching his facility.  Carson’s can be found in Indiana, Kentucky, and Illinois today, and they are already looking to expand to Texas, Arkansas, Missouri, and Ohio soon. 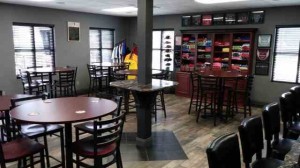 The taproom is a very comfortable place to visit, with lots of seating and a very cool outdoor setup that looks like a lot of fun to visit and hang out with friends. There is no food served at the brewery, but food trucks do occasionally make a visit. 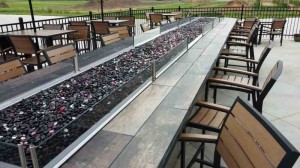 Lots of outdoor seating, including a bar that has a fire feature. 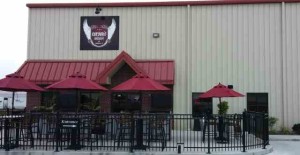