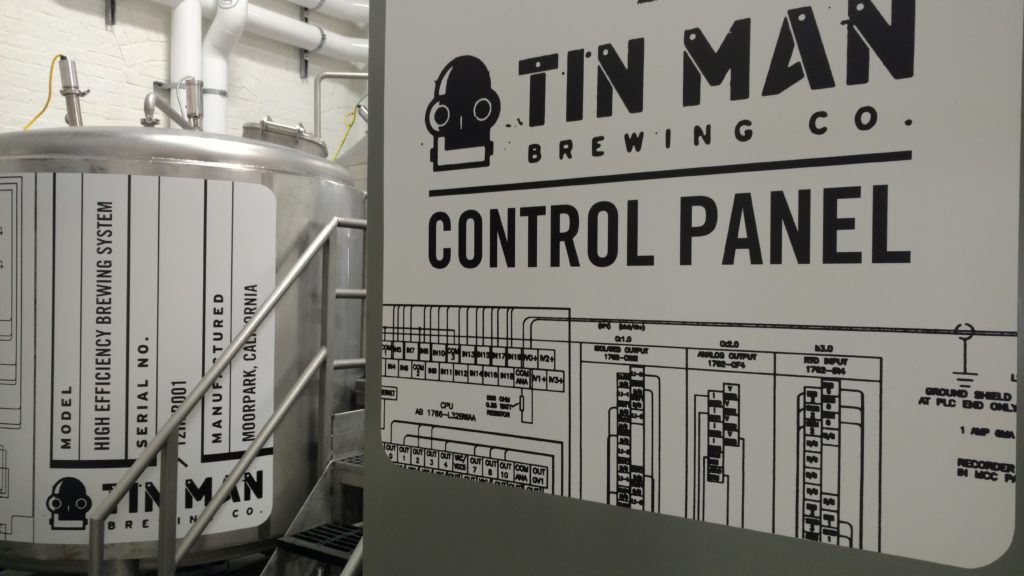 [Note: I wrote this back in July, and then summarily lost it in my inbox for 3 months.  Nobody to blame here but me.]

We’re midway through the summer of 2016, and I’m back in my old hometown, visiting with friends and looking at what’s new and what’s matured since having left the area almost five years ago.  Five years is an eternity in the beer industry, and as the time has gone by, I have seen a town with a single pizza joint/brewpub blossom into a town with a handful of breweries.  Leading that charge is Tin Man, founded in 2012.

If you’re not familiar with the demographics of Evansville, it was primarily a german settlement and community for many years, and a lot of that influence remains in the restaurants and mentality of the region.  I say all of this to help set your mind in gear for what Tin Man has to offer.  Sure, they have hoppy options (Alloy & Overlord to name a few), but they also like to play in the german arena, with a very solid czech pilsner (Circuit), and other small batch summer offerings.  In fact, as they gear up to supply the official beer of the Mt. Vernon, Indiana bicentennial, they are crafting a dortmunder export style named “Hoop Pole” to commemorate the history of the area.

Another one of their more recent creations is one called Hops & Hominy, a pale ale to celebrate Indiana’s bicentennial, featuring all state-sourced ingredients, from the hops (Indianapolis) to the malts (Lebanon, IN).

Don’t mistake this review as a quick view of the standard core lineup, which is quite solid.  Some of where Tin Man has really been shining as of late is their “newer” additions, especially their sours.

And then we get into the sours…Listen, when I travel to Indiana, it’s not uncommon to hear “hey, bring me some Overlord!”, from my local Charlotte friends, and it’s become a standard purchase to haul back.  Then about 9 months ago, I brought back some Damascene, with it’s bleu-cheese funk on the nose, and the great apricot sourness.  It’s a huge hit here in Charlotte, and then became part of my regular haul back to NC.  I thought I was safe, and then I brought back the seasonally-changing Weld sour (springtime was pear, summer is strawberry), and my friends here lost their collective minds.  (note: I may need to start taking out a 2nd mortgage when I visit family just to cover my beer haul.)

As a brewery, Tin Man was moderately ahead of the curve when it came to canning -vs- bottling, but not for the typical reasons you’d expect.  Tin Man is extremely focused on sustainability and lessening their impact to the environment, and well, cans are just easier to recycle than glass.  If you did want a glass container, your only option will be a growler.  Moving past packaging, Tin Man is one of very few brewers with the “High Efficiency Brewing System” (HEBS for short) that actually squeezes out more liquid from the spent grains than you’d see in a traditional setup, which allows them to use less water during brew cycles.

Something you definitely want to check out when you’re there is their local-artist glasses.  First, they’re cool because they’re shaped like cans.  The art on the glasses is all locally sourced, and they sell these in the brewery until they’re gone.  I’d also be doing Tin Man a great disservice if I didn’t mention their food.  I’ve eaten a couple of meals there, and I’ve never walked away disappointed.  I would consider it “upscale pub food” and there’s something for everyone here.

Tin Man has their finger on the pulse of their community, and looks to grow organically with it.  They have aspirations to reach the northern third of Indiana, and I see no reason why they’ll have any trouble.

Tin Man is a cool place with a lot of fun and well made beer that is worth your time if you’re ever in the area.